Interview with Dr Thomas Altenbach on whistleblowing and whistleblower protection

What is a whistleblowing system?

Whistleblowing systems give employees the opportunity to report anonymously if they have observed a violation of laws or regulations in the company. These reports can be made in writing or by telephone. The person decides whether they want to remain anonymous.

What does this actually mean? In many industries there are strict quality requirements and violations of these have far-reaching consequences: think, for example, of the food, chemical or medical technology industries. Even the slightest deviations can be fatal. But also in other industries, misconduct can lead to large claims for damages, recalls or scandals. In the automotive industry, the diesel scandal is certainly one of the best-known violations.

However, it is not only about violations “on a grand scale”. Other breaches of the law may well be more common, such as price fixing, inappropriate gifts and invitations, or breaches of internal compliance rules. A whistleblower system serves to identify such misconduct at an early stage and to take countermeasures before negative consequences occur: i.e. economic damage and damage to the company’s reputation.

Why should I introduce a whistleblowing system in my company?

You should implement a whistleblowing system in your company if you want to reduce the risk that unintentional negligence or deliberate misconduct will jeopardise your reputation and trust. You have spent years or even decades building up this reputation in the market and this trust of your customers. But a single scandal can be enough to jeopardise the existence of medium-sized companies in particular. If you trust that it always hits the others, you close your eyes to a real danger – it feels like Russian roulette!

I was in charge of whistleblower systems in several companies and I can tell you from experience: in my career there were several reports where the company was happy to learn about the violations of the law through the internal reporting channel. The way via the press would have been a disaster.

Meanwhile, in addition to this function as an early warning system, there is another good reason why you should introduce a whistleblower system in your company. The EU Whistleblower Directive, obliges all companies with 250 or more employees and public authorities to offer appropriate reporting channels.

I keep hearing that this is considered a burdensome obligation. Based on my experience, I see it differently: this need for action is a great opportunity for companies and authorities. Malpractices can be discovered at an early stage and in many successful companies a whistleblower system makes an important contribution to prevention.

Because the reality is: most people are reluctant to point out a grievance or misconduct by colleagues or superiors because they are afraid of personal consequences and possibly risk their own existence. Whistleblowing is a highly emotional issue. This makes whistleblower protection all the more important: with the help of whistleblower systems, companies give their honest and loyal employees a voice. This is especially true if whistleblowers are able to communicate anonymously. 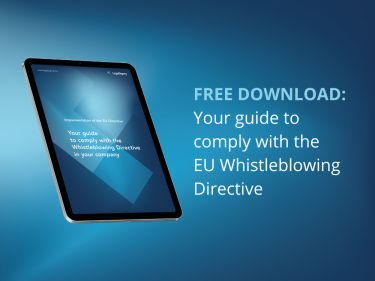 The negative connotation of whistleblowing

They say the world loves a betrayer, but not a traitor. It is similar with whistleblowers. We are all fascinated by the courage of Edward Snowden or Julian Assange. Yet whistleblowing has a rather negative connotation among us. Why is that the case?

Snowden and Assange have revealed state secrets to the public. This is to be rejected per se, even if it was of great interest to society that these were exposed. Furthermore, because of our history, betrayal has a very negative connotation, especially in Germany. Children are reprimanded for “snitching” and learn at an early age that you don’t do that. Of course, no one wants to be snitched on themselves.

The result of the negative connotation are doubts on behalf of both the employees and the company about whistleblowing itself. But this association with “whistleblowing” is, in my opinion, wrong: with internal whistleblowing systems, companies can avoid confidential information going public. They can directly address and remedy the reported problem. The EU Directive grants protection to the whistleblower who first uses the internal channels provided by the company. If your company has a whistleblowing system but does not respond within the specified time limits, the whistleblower can turn to the authorities or the public – without penalty. The same applies if your company does not provide a reporting channel: Then, in the case of a report to the authorities or the newspaper, even the report on confidentiality or trade secrets does not apply.

The Directive therefore goes a step further than simply obliging you to set up a reporting channel: it imposes deadlines on your company within which you must acknowledge receipt of the whistleblower’s report and provide information on the measures taken and the results of the investigation.

Whistleblowing as an act of loyalty

Are whistleblowers a danger for my company?

Companies expect trusting cooperation and loyalty from their employees. Does whistleblowing mean loyalty to the company, to the supervisor or to colleagues?

The best way to answer this question is to put yourself in the position of a doctor who notices that illegal euthanasia is being carried out in his clinic, perhaps even by his boss. Or in the position of a civil servant who notices that there are massive violations of public procurement law in his authority and that colleagues are receiving bribes for this. Or that of an employee who observes that expired food is being repackaged and relabelled.

Perhaps you worked very well with the colleague, often went to lunch together and met for a glass of wine at the end of the day. You know the family, the living circumstances, you know that the children are in education or that one parent needs care.

They know that their report of a serious violation of the law could lead to a warning, dismissal, perhaps criminal consequences for their boss or colleagues. You consider how your other colleagues will react if it becomes known that you have reported the behaviour. Would they still want to work with you or would they avoid you? How would you behave?

Most employees choose to remain silent. Fear of consequences makes them value loyalty to colleagues and superiors more than loyalty to their company. However, if your company has a whistleblowing system that allows anonymous reporting and protects the identity of the whistleblower, the personal risk for the person decreases. The inhibition threshold to make a report is reduced. Loyalty to the company, the protection of the company that goes with it and thus the long-term security of one’s own job can once again come first – without risk.

The EU Directive as protection of whistleblowers

Who should the EU Whistleblower Directive protect and why?

The EU Parliament and the EU Commission wanted to use the positive experiences of large companies with whistleblower systems also for medium-sized companies in order to avoid scandals in public. Whistleblowers are to be protected from any negative consequences such as mobbing, harassment, warnings and even dismissal. However, whistleblower protection has even more advantages: it automatically becomes a protective shield for the company or the authority as well. It is estimated that German companies lose five per cent of their revenues every year due to criminal offences in the business sector. That can quickly add up to a six-figure sum for a medium-sized company, and for large companies the sum climbs into the millions.

I remember a case of a former client where significant working time offences came to light. It involved a location that was several hundred kilometres away from the head office. As a result, no one at the head office noticed that the employees at that location were forced to work far too long and without adequate rest breaks. When this was discovered during an inspection by the labour inspectorate, the company had to pay a six-figure fine. An anonymous whistleblowing system could have prevented the damage completely.

Dr Altenbach, you are a lawyer and were involved in the expansion of compliance systems at the big players Deutsche Bank and Daimler AG within their legal departments. In each case, this was at a time when both companies were in the public eye due to scandals. How did you experience dealing with whistleblowers there?

This was handled differently. At Daimler the reports were explicitly desired; at Deutsche Bank this was not encouraged in the same way. In the beginning, it was merely the fulfilment of duty. Compared to the number of employees, there were perhaps a fifth as many reports as at Daimler AG. However, at Daimler I also experienced how a CFO accused a whistleblower coram publico of defiling his own reputation. At the time, the board reacted very wisely and did not dismiss the whistleblower but the CFO. This was also communicated on the intranet and was a clear signal to the staff.

With the American monitor Louis Freeh, a former FBI director under Bill Clinton and George W. Bush, a different culture came into the group. Basically, from then on, employees could give reports without immediately fearing negative consequences. However, as a lawyer leading investigations against high-ranking executives, one had few friends there.

Why is the directive being introduced now at all? What impact will the federal election have on the resulting Whistleblower Protection Act?

The EU Whistleblower Directive was adopted to ensure, for example, the fight against money laundering on a large scale or to guarantee food and product safety throughout Europe. The legislator also wanted to ensure public health, environmental protection and nuclear safety.

Since December 2021, whistleblowers should be able to rely on secure whistleblowing systems to pass on information both within companies and to the authorities. They should also be effectively protected from dismissal, harassment or other forms of retaliation. 1

The obligation to introduce a whistleblower system to protect whistleblowers has been in force since December 2021, but many EU member states have yet to transpose it into national law, including Germany. In principle, national legislatures are free to interpret the directive more narrowly, but the minimum standards must not be undercut. The result of the Bundestag election thus had a groundbreaking effect on the future design of the German Whistleblower Protection Act. Since the CDU/CSU had rejected the draft bill at the time, it is likely that the new draft will be based on the old one. In detail, this means, for example, that according to the EU Directive, only whistleblowers who report violations of EU law are protected. The draft bill went beyond this and provided that the Whistleblower Protection Act also protects those who report violations of German law.

In summary: Why do whistleblowing systems in companies make sense – also independently of the directive?

Dr. Thomas Altenbach: The protection of whistleblowers has been inconsistent across the EU. Most EU countries provide only partial protection in certain sectors of the economy or for certain categories of workers.2

By introducing an anonymised whistleblower system, this protection is made possible for all employees of a company, regardless of their status, seniority or industry. The same applies to the business partners of a company or a public authority. In future, whistleblower systems will ensure that no one will suffer personal or professional disadvantages if he or she makes a justified report of one or more violations within a company, a partner company or a public authority. This will avert personal harm to whistleblowers as well as economic and reputational harm to the company concerned.

As a next step, download our guide “On how to implement the whistleblowing policy in your company”. Or contact one of our experts for a personal discussion. 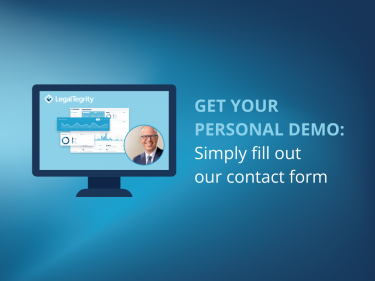 Learnings from the draft of the German Whistleblower Protection Act

How to deal with whistleblowing reports

Liability risk due to lack of whistleblowing system